My Son, My Teacher

1979.  Our son was born and five months later he was diagnosed with Cerebral Palsy, and I was told he may never walk!

Something I never really wanted to talk about is the fact that our little 5-month old son was diagnosed with Cerebral Palsy in early 1980.  I realise, however, the strength of impact this has had on both my husband's and my life.

Our first month there, we had to make a home out of a very dirty house on the compound, after which I set out to teach myself how to cook, make my own crafts, sew and be a mummy!

This was short-lived as our baby developed infantile spasms within our first month there.  I returned  to the UK by the end of that first month in Africa, with our little one to get treatment and medication.  That is when our world shattered when receiving his diagnosis. 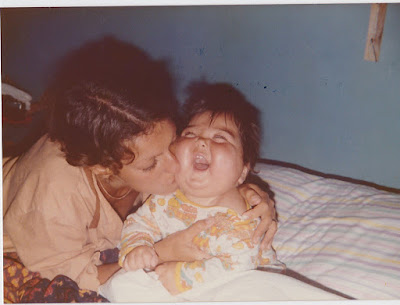 Back in Zambia after our first visit to the hospital in the UK,
Ashley being jolly despite a high dose of steroids.

For the next seven years, I became his full-time occupational and physiotherapist and delved into my creative vault to find ways of stimulating our adorable and jolly little boy.  To help him gain some sense of balance when sitting, to see and focus on objects and us from a distance, to get him out of his long blank spells when he seemed to off into another “dimension”.

My job as “excess luggage” was cut out for me and I embraced it with love and joy and a real drive.  I learned how to become wife/mother/cook/therapist during those six years in Zambia.  We adored our little boy, so this was a challenge we faced together and Roger learned to be a real handyman and carpenter.  He built our boy walkers, standing frames and corner seats.  He became an adept Landrover mechanic, electrician and all-round protector.  We both learned the skills of self-sufficiency and adaptation to the various circumstances which offered themselves to us.

1982.  Our second little son was born while out in Eastern Province of Zambia.  He was very premature, at 28 weeks, born at the nearest mission hospital 20 miles from where we lived.  He popped out so quickly, unlike our first boy who took three days, and who was born at 36 weeks.  This little one cried, and was very much alive, but still waxy and didn't look “quite ready”. He was whisked away from me and put in a little wooden box surrounded by hot-water bottles.  Roger kept the heaters on full blast in the Landrover as our baby had to be rushed to another bigger mission hospital 56 miles further, where they had incubators.  Our German nurse friend who held my hand during the birth, decided it was better for the baby to hold him against her skin during the long journey, which is what she did.  I was told by the midwife Sister to stay behind to be looked after!

The next day my hubby drove me to be with my little baby, and when we arrived the exhausted European doctor/midwife, who had been on duty for over 72 hours without sleep, told us they'd had to resuscitate Laurie (we gave him a name of course!) already twice.

That day and night I spent either wandering around helplessly in the cattle-shed type ward, with the wind howling through, wafting smells of cabbage all around us, and visiting my little boy in his starched hospital gown inside the incubator, with cockroaches running around inside it.  The other pass-time was joining the group of Zambian young mothers in a communal room where we sat in a circle expressing our milk by hand.  All I could contribute was a tiny bit of colostrum to add to the rich milk these ladies produced as they were still breastfeeding their previous child!  After our “milking session” we then had to pour our contribution in a common green plastic bowl, which would then be used to feed the premature babies!

Three days after our baby's birth they had one final attempt at resuscitating him when he decided that this earth life was not for him and so he returned to his original home.

The African staff were very sweet and philosophical, they shook our hands goodbye, and advised us to go home and make another baby!

Now there is a lonesome little grave under an acacia tree, with a home-made cross with its branches, in Katete Mission Hospital.  Laurie's spirit is free. He gave us the opportunity to focus truly on his older little brother.

We returned to our compound home to digest all that had happened so quickly and felt shell-shocked. I spent hours sitting under our mango tree grieving the loss of Laurie, my body feeling cheated as I was now producing huge amounts of milk, but with no baby to feed.  The young Dutch doctor at the mission hospital apologetically gave me the only drug he could obtain to dry my milk production, which made me put on loads of weight quickly, as I was really thin in those days.

Thankfully, our three-year-old son kept us sane and filled our days with love and laughter.  We had also employed a wonderful Zambian lady to be his nanny during my pregnancy, as lifting my 3-year old, who could not walk became a little strenuous, and she was a Godsend! 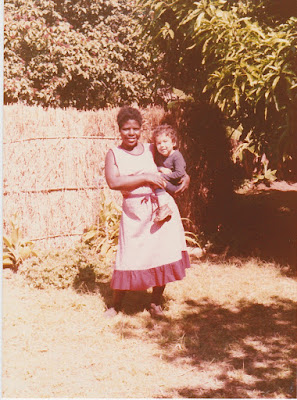 Ashley's Nanny wearing one of my creations, the dress!

In the meantime, we continued to gain experiences on survival, as within the first year of our life in the Eastern Province of Zambia, the water stopped flowing.  My new vegetable garden dried out and we programmed ourselves to wake up at 3 AM, to swap the hosepipe from one full white-painted dustbin to fill the other with the trickle of water which is all that reached us at that time of day!  So, water was rationed and this situation became a bit of a nightmare with regards to boiling nappies!  No such thing as disposables!  Bath water was recycled and we kept a paddling pool with water to have a “shower” in!

Every two months we would travel at the crack of dawn to the Eastern province capital, Chipata, to go to the market.  That was an entire expedition in itself, as we needed to prepare in case of a breakdown with the Landrover and carry jerry cans of petrol, water, take food, drink and blankets, as we were travelling through the desolate bush with few clusters of mud huts along the way.  Of course, these were the pre-mobile phone days!

We arrived at the bustling market at around 7-8 AM, after a three-hour journey, to stock up with fresh vegetables, fruit and meat, all commodities which were rare in our village.  This trip always turned into a special treat, as we would go and have a curry in one of the local restaurants, not always guaranteed to be safe on our stomachs!

Then followed the long trip back home, and of course with our little one, who accompanied us everywhere.  Once home and he was safely tucked in his cot, we spent several hours blanching and freezing our fresh supplies, and butchering the meat, to have food for the next two months.

Our little local supermarket in the Boma (the village centre), had mainly empty shelves and mostly stocked ominous looking coloured squash, called Jolly Juice.  Cooking oil, sugar, flour were rare commodities and no sooner as the lorry arrived in the Boma, everybody would rush to the supermarket to stand in queues for hours to buy their rations.  We would get a 25 KG bag of flour, which I would then bag up in smaller quantities and freeze, and the rest would stay in the sack, to be sieved to get rid of the weevils, before making bread!  During bread-making days, I also made pizzas, which we would eat that day, and then freeze the rest.  Everything we wanted we had to make ourselves, including tomato ketchup!

We also employed a house-boy, called James, whom I taught to cook basic meals and bake our bread.  He was worth his weight in gold!  Both he and Nanny stayed with us for the six years we lived in Africa.  We needed their help as there were no washing machines, and I spent all day either preparing food in advance, occupying my baby, making crafts, curtains, clothes...

Very often we went weeks without electricity, so then we learned from both of them how to use the local charcoal fires, which were cylindrical shaped and the size of a large paint pot.  Once I cooked food for 36 people on two of those!  Whenever we had a power cut for more than three days, we would cook the entire contents of the freezer and have a party for our local friends!  It was a great excuse to socialise!

This is how as a young family we learned to be self-sufficient, how survival's necessities helped us cope with the loss of our second little boy and how it made us question our purpose on this earth.

We moved for the last three years in Central Africa to the southern province of Zambia to my mother's farmhouse, by the Zambezi river, which set the new pattern of me becoming a fitness instructor and amateur artist.

It was during 1982-83 that I became a devout... Fitness fanatic and instructor.  Creating a real stir in Livingstone, Southern Province, Zambia, for three years, while putting significant groups of people through their paces to terrific music.

So, the pattern was set as far as my physical activities were concerned and I became ultra fit!

1986.  We returned to England, after those momentous six years in Zambia.  Roger's contract ended, and he did not want to renew it. Moreover, we needed to find new ways of helping our 6-year old son.

Circumstances and deep heartache forced us to deal with these challenges to the best of our abilities.  We both were given a book by a friend while in Zambia, “Out on a Limb”, by Shirley Maclaine, which created a massive shift within us both, and helped open our eyes to spirituality and our purpose.

This is an excerpt from my yet to be published book - 'How did I get these?'.
Posted by Nadia Smith at 07:47 2 comments: 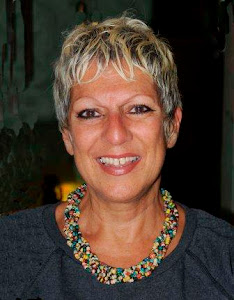